The graduation ceremony of female international graduates of the country's universities was held at Ferdowsi University of Mashhad (FUM). This graduation ceremony was held in the presence of Dr. Dadashpour, Deputy Minister and Head of the Student Affairs Organization, Dr. Ganji, Head of the Student Welfare Fund, Dr. Ghafari, Vice President of Cultural, Social and Student Affairs, and Dr. Asghari, Director of Cultural and Voluntary Activities of FUM, on Thursday, July 14, 2022.


Dr. Hashem Dadashpour, Deputy Minister and Head of the Student Affairs Organization said at this ceremony: "The graduation is a turning point and he added: Being a university student is very valuable and brings you a memorable time. Also, professors are always trying to bring the students to a high level of talent, ability, and knowledge, and in addition, being with other students on the university campus creates a lot of good memories.


He added: When you live in your city and country, and then for continuing your studies, you move to other countries, the difference between the two spaces may bother you at first, but the atmosphere and characteristics of Iranian universities are so close to each other that there is no room left for differences. Among Islamic countries, there are so many common features in the language, beliefs, etc, that the differences are not very obvious.


The head of the student affairs organization said: Currently, Iran has reached the level you are seeing. Most families set education as a criterion for themselves and are trying to educate their children, which is a revolution in development as well as a revolution in science; To the extent that Iran has won the 15th rank of scientific articles in the world.


Dr. Dadashpour stated: The huge wave that is going on in the countries is that the economy of the countries has changed to a knowledge-based economy. You and I, the scholars, must try so that Islamic countries can regain their place in the world, and he emphasized: We must try to play the role of Islamic countries, and this will not work without your and my efforts.


In the continuation of this ceremony, Dr. Ahad Zabett, the president of FUM, said in a speech: "The blessing of science is in respecting the professors." If you want to enjoy your life; Do good to your parents and added: when I studied abroad, even despite the differences in beliefs and politics, I still consider respect for the professors and this brings the blessing of knowledge in life. Also, being kind to parents makes life enjoyable; Even if you don't have a lot of wealth in life.


Then, Dr. Masoud Ganji, the head of the students' welfare fund of the Ministry of Science, said: Now that you are educated and going to your country, try not to fall behind in scientific matters and the friendship that has been established between you. keep Besides science, surely moral issues are also valuable to you and you have remained in this framework. He added: If you maintain this relationship between you, I am sure you can take great steps in international unity and the field of equality between men and women, and these steps will happen by you who are the educated people of this society.


Dr. Ganji, head of the students' welfare fund of the Ministry of Science, noted: Wherever there is science, if you find the field suitable, go for it. If women want to become powerful, they should pursue science. The greater their mastery, the greater the power and influence of their words.


It should be noted that this ceremony was held at FUM with the presence of 150 female students of 20 nationalities from 43 universities in the country. 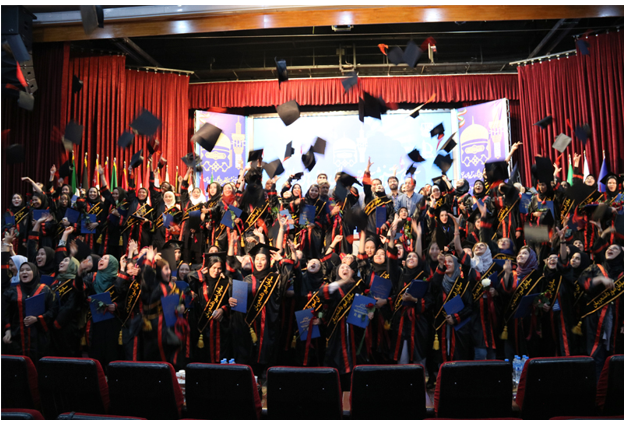