The opening ceremony of the first international congress of the School of Honorable General of Islam, Martyr Hajj Qasem Soleimani was held virtually on 22 December 2020 at Ferdowsi University of Mashhad (FUM).


In this opening ceremony, Hojjat al-Islam Dr. Mostafa Rostami said: The sincerity, purity, and love that Martyr Soleimani had for God made him popular among the people. He added: "Universities are an energetic part and the beating heart of knowledge production in all fields, so they have great responsibilities in the field of knowledge production."


Prof. Mohammad Kafi, President of Ferdowsi University of Mashhad, while wishing health, expressed hope for the continuity of this congress, and said: “The lifestyle, management, behavior, and treatment with family and community of persons such as Martyr Soleimani during their lifetime should be identified and introduced as successful models in society.


Hojjat al-Islam Alamolhoda, the representative of the Supreme Leader in Khorasan Razavi province,  also referred to the moral characteristics of Martyr Soleimani in his speech and said: Martyr Soleimani had a respected and popular personality in his great movements, insights, efforts, and activities. He was also a perfect model for human vision. He also said that it is a great advantage that the Resistance Front in the country was first formed at the university.


Hujjat al-Islam Torabi, the representative of the Supreme Leader in the universities of Khorasan Razavi, said: “Martyr Soleimani is a model and we should learn from his personality, character, and attitude. Therefore, universities should be at the forefront of reflecting the school of this honorable martyr.


It is good to mention that the first international congress of martyr Soleimani School will be continued from December 22, 2020, to  January  7, 2021, with programs and meetings on this occasion. 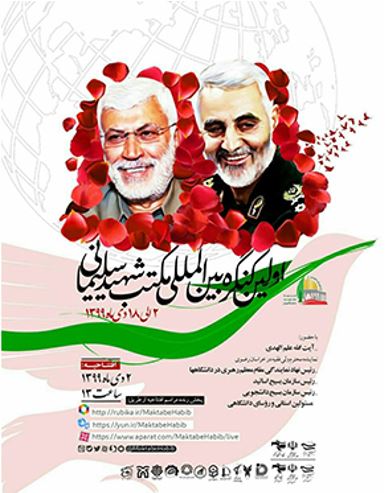